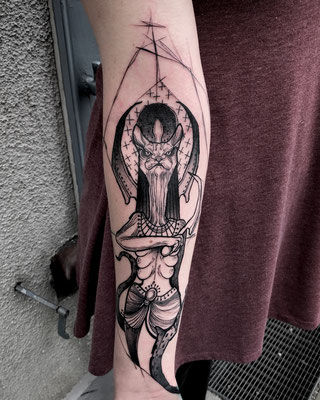 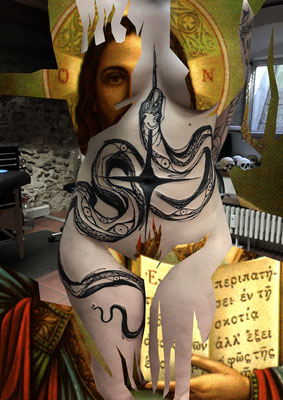 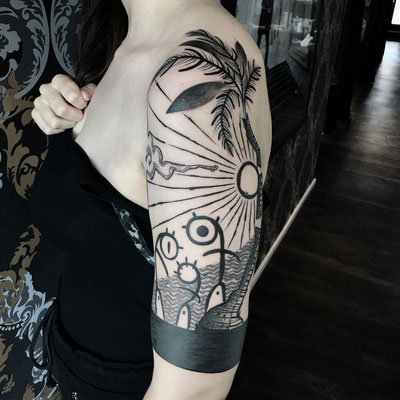 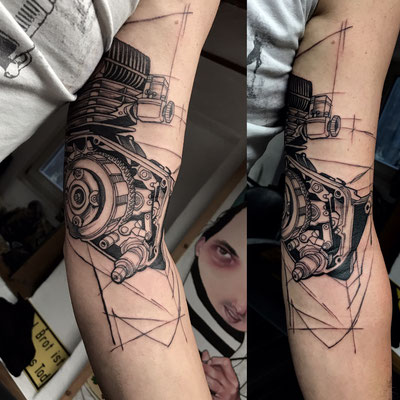 Tattooing and I met officially the first time in 2008 by Stigmata Tatuaggi/Milan/Italy where I served my apprenticeship. In the same year  I graduated at this very Italian high school called Liceo Artistico U. Boccioni: it is something like a Gymnasium with a focus on applied and theoretical arts,  specialising in architecture and interior design. This led me to the first two semesters of Scene Set for Theatre at the Art Academy in Brera, also Milan.

At this crucial point I was, exhausted, struggling to make a living on my own and had to set priorities among the (too many) commitments, including my feminist gang activities. So I decided to follow what I felt most passionate for  and left the Academy  to focus on tattooing and develop my own style, which I now call Neurotic Realism.

In 2011 I moved to Germany and collaborated shortly with Kaylitos Way/ Duisburg and Seven Eleven/Krefeld and  with  Tattoowahn/Duisburg  for two and a half years before I opened my first tattoo parlour Jurassic Tattoos in Duisburg at the of beginning of 2014. From the end of 2015  to mid-2017 I run a partnership with Karsten Koch as Jurassic Submerge in Bochum.

Besides tattooing I create imagery and illustrations, under commission or freestyle, prints, screen prints, handmade notebooks,  illustration books, various merchandise and whatsoever you might wanna hang on your walls or gift your mum. For all this just scroll the menu on the left hand side.

This is me with my dog Pimpa.

Every year since 2014 I organize a funding action in favour of the women's house association of the city or area  where I live.

In Germany women's houses are led by the association "Frauen helfen Frauen e.V."  (Women  help Women);  they are autonomous, apolitical and nonreligious. Their ideological independence is very important to support victims of mental and physical abuse, they get funds from the government and from individuals, they are run by few volunteers  and the structures always struggle to survive costs.

As I'm convinced that, sadly, governmental funds do not match the needs of these structures and projects, I believe it is very important to support them as much as one can.

My funding actions always involve some feminist themed  illustrations that I create for the purpose, sold in tattoo shops, at tattoo conventions and online.